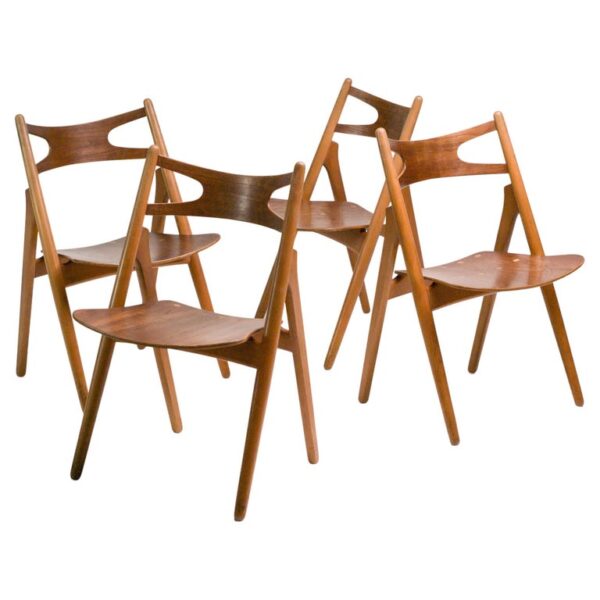 Hans J. Wegner for Carl Hansen & Søn, set of four ‘Sawbuck’ CH29 chairs, teak, Denmark, 1952. This set of four chairs is designed by Hans J. Wegner for Carl Hansen. This is the most desirable version with visible seat construction. The table is no longer available.
The chair has a slightly slanted position, making the chair more comfortable than it looks. A number of chairs by Wegner are called sawbuck chairs, or ‘bukkestole’ in Danish. These chairs, which are closely related to folding chairs, but yet fixed in an open position. The name derives from the shape that sawbucks or sawhorses in his workshop.
Hans Wegner (1914-2007) is one of the most prolific furniture designers of the world. Wegner’s furniture was designed with the greatest understanding of materials, construction techniques, and use. Wegner is known to be an excellent cabinet maker with thorough understanding of the materials he worked with, yet his greatest aim was to create expressive and exciting design. Although Wegner was a functionalist, he was not a rational dogmatist such as Kaare Klint, of whom he was a student. Instead, his designs sparkle with inventiveness and sculptural sense. But this never meant that his organic and sensuous forms left the strict rules of functionalism. At heart, Wegner was an idealist. He was relentless in his quest for the best chair: ‘there is never one damn thing that cannot be made better’. But Wegner was aware of the fact that you cannot design the ‘perfect’ chair, which gave him the freedom to produce as much as possible. He left behind more than 3500 drawings and about 500 of his designs went into production. His designs feature in the UN Building and Seagram Building in New York, UNESCO’s headquarters. NATO’s headquarters in Paris, and several buildings by the architects Skidmore, Owings & Merrill.