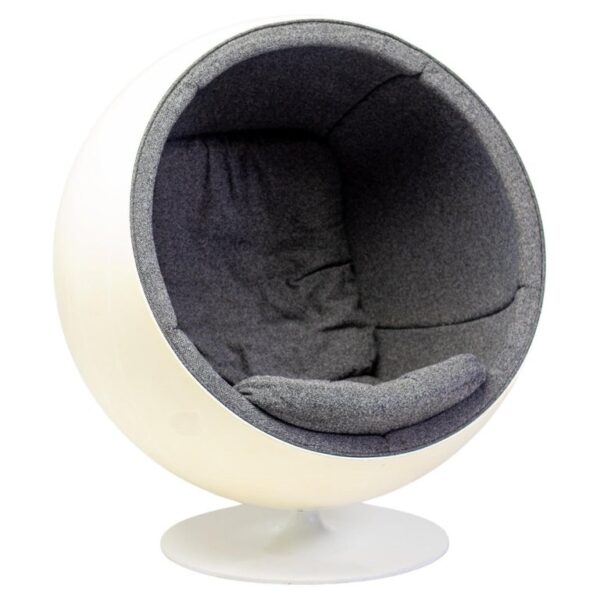 Original ball chair designed by Eero Aarnio and manufactured by Adelta, Finland. The Ball chair was designed in 1963 and debuted at the Cologne Furniture Fair in 1966. The chair is one of the most famous and beloved classics of Finnish design and it was the international breakthrough of Eero Aarnio. The Ball Chair can be found in the collections of design museums around the world and it has starred in several movies, music videos and magazine covers. As Adelta produced the chair until the early 1990s, this is a rare collector item. Great vintage condition with the original two-tone Hallingdal fabric designed by Nanna Ditzel.
Eero Aarnio (born 21 July 1932, in Helsinki) is a Finnish interior designer, noted for his innovative furniture designs in the 1960s, such as his plastic and fiberglas chairs.
Aarnio studied at the Institute of Industrial Arts in Helsinki, and started his own office in 1962. The following year, he introduced his Ball Chair, a hollow sphere on a stand, open on one side to allow a person to sit within. The Ball Chair was introduced to the international public at the Asko stand at the Cologne furniture fair in 1966. The similar Bubble Chair was clear and suspended from above. Other innovative designs included his Pastil Chair (a beanbag-like molded armchair), and Tomato Chair (a seat molded between three supporting spheres). His Screw Table, as the name suggests, had the appearance of a flat head screw driven into the ground. He was awarded the American Industrial Design award in 1968. Aarnio’s designs were an important aspect of 1960s popular culture, and could often be seen as part of sets in period science-fiction films. Because his designs used very simple geometric forms, they were ideal for such productions.