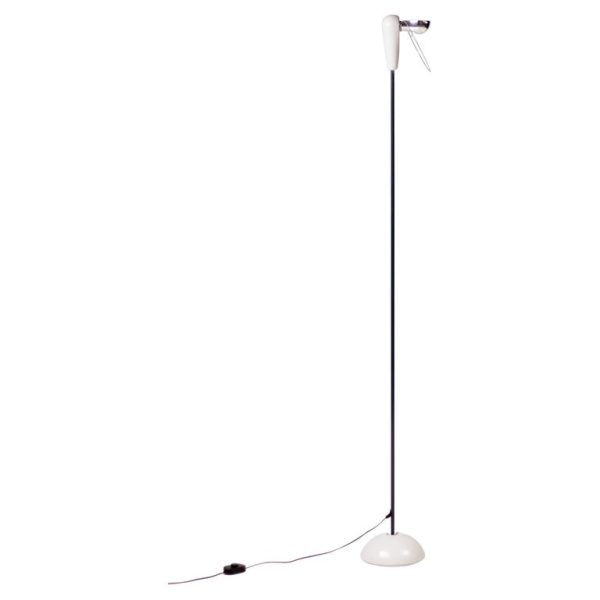 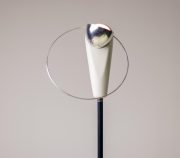 Rare Bibip floor lamp designed in 1976 by Achille Castiglioni for Flos. Beautiful but also very practical design that can be used both as an uplighter as well as a downlighter. Marked with label.
Documented; Repertorio 1950-1980, page 437
Achille Castiglioni was a prolific furniture, lighting, and product Italian designer renown for his ironic, joyful, creative and functional designs that, at times, intersected with ideas explored by conceptual artists.
Achille Castiglioni was born into a family with deep appreciation for the arts, as he was the third son of sculptor and coin engraver Giannino Castiglioni and his wife Livia Bolla. He first studied the classics at the Liceo Classico Giuseppe Parini, but then switched to study art at the Accademia di Belle Arti di Brera in Milan. In 1937, he decided to follow the steps of his two elder brothers, architects Livio and Pier Giacomo Castiglioni, by enrolling in the Faculty of Architecture at the Politecnico di Milano, graduating in 1944–after having to interrupt his studies when he was stationed in Greece and Sicily during World War II.
In 1944, immediately after graduating, Achille Castiglioni joined his brothers Livio and Pier Giacomo in the design studio that they had founded with Livio’s classmate Luigi Caccia Dominioni in 1937 in Milan. Fortunately for Achille, from the very beginning Livio and Pier Giacomo decided to focus almost entirely on designing exhibitions, furniture, housewares, and appliances since architectural commissions were difficult to come by during the war. This product-design focus, and the deep fraternal bound among the three brothers, would later allow the young Achille to experiment early in his career with emerging techniques and new materials that could communicate a fresh aesthetic sensibility suited for the positive outlook of the post-war European market.