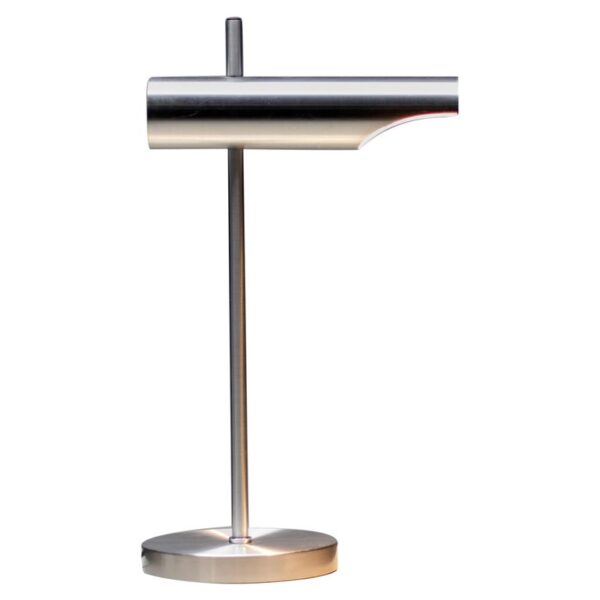 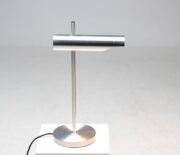 Fuga table lamp designed by Maija Liisa Komulainen for RAAK Amsterdam. Beautiful Minimalist design in brushed aluminium.
Maija-Liisa (Maikki) Komulainen (born in 1922 in Kajaani, Finland ) is a Finnish interior and industrial designer best known for her futuristic lights and innovative furniture designs.
Komulainen graduated from the the University of Art and Design in Helsinki in 1949 and from 1950 to the late 1960s she worked in Helsinki on interior design projects as well as furniture. She designed seating furniture such as chairs made of wood, wicker or metal as well as lounge chairs and sofas for Uusi Koti- Nya Hemmet.
In the late 1950s Komulainen furnished Tamminiemi, at the time the residence of Finnish president Urho Kekkonen in Helsinki, together with his wife Sylvi Kekkonen. They replaced the faux rococo furniture that had dominated the residence and modernized the interior.
Her best-known creations include lighting objects such as her wall lights Fuga, reminiscent of organ pipes and made of aluminum with several concealed light sources, which she designed around 1970 for the Dutch manufacturer of lights – Raak in Amsterdam, Holland. Raak was founded in 1954 by Carel O. Lockhorn and is one of the most important Dutch lighting manufacturers of the 20th century.
The company manufactured a large number of Komulainen’s lights, which, with their warm, indirect light, were widely used in public buildings. The mushroom inspired metal floor or table lamp Chantarelle, made of mostly copper-colored anodized aluminum is one of her significant works, a key piece in the 1960’s space age.