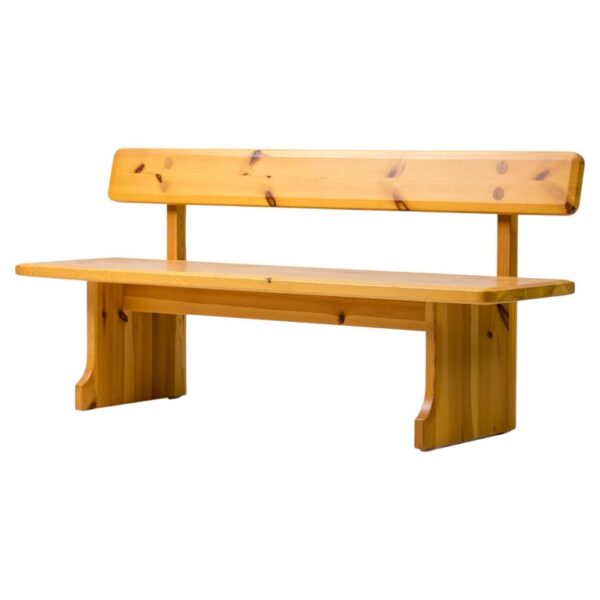 Mid-Century Scandinavian Modern solid pine bench by Swedish company Karl Andersson and Söner, designed by Carl Malmsten. Nice woodworking details that are also present in the designs of Axel Einar Hjorth, Pierre Chapo and Charlotte Perriand. Marked with gold foil label.
Carl Malmsten was a Swedish furniture designer, architect, and educator who was known for his devotion to traditional Swedish craftmanship (slöjd) and his opposition to functionalism. He “considered the rationalization of the home according to functionalist principles a debasement of its traditional role as an intimate place for gathering and repose”. Malmsten was born in Stockholm, Sweden. He was the son of Karl Malmsten and Inez Cadier. Malmsten’s career took off when he won a competition in 1916 to design furniture for the Stockholm City Hall (stadshus); in 1917, he exhibited alongside well-known Swedish architects such as Gunnar Asplund and Uno Åhrén. Malmsten founded an eponymous furniture store on the riverfront of Stockholm. In the 1920s he was invited to furnish a room for the crown prince, Gustaf VI Adolf, and his wife Louise in Ulriksdal Palace. He was honoured with an inaugural Prince Eugen Medal for design in 1945.