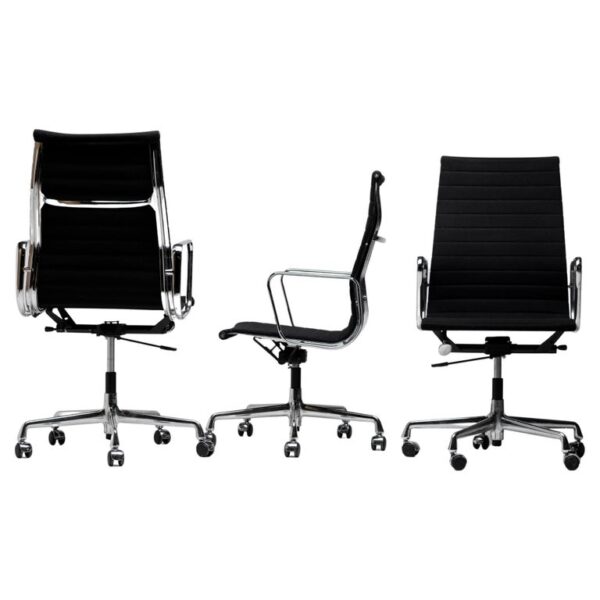 Executive office chair, model EA119, designed by Charles and Ray Eames for Vitra / Herman Miller. High backrest and seat in black Hopsak fabric. Frame, armrests and five-star base in die-cast aluminium with chrome-plated finish. Seat mechanism with adjustable backward tilt, lockable in the forward position. Continuous seat height adjustment with gas spring. Seat height can be adjusted between 41 – 51 cm (16″ – 20″). Castors for carpet, but new soft castors for hard floors are available upon request. Signed with manufacturer’s label. Three available, priced individually.
Charles and Ray Eames married in 1941 and moved to Los Angeles, where together they began experimenting with techniques for the three-dimensional moulding of plywood. The aim was to create comfortable chairs that were affordable. However, the war interrupted their work, and Charles and Ray turned instead to the design and development of leg splints made of plywood, which were manufactured in large quantities for the US Navy. In 1946, they exhibited their experimental furniture designs at MoMA. The Herman Miller Company in Zeeland, Michigan, subsequently began to produce Eames furniture. Charles and Ray participated in the 1948 ‘Low-Cost Furniture’ competition at MoMA, and they built the Eames House in 1949 as their own private residence. In addition to their work in furniture design and architecture, they also regularly turned their hand to graphic design, photography, film and exhibition design.
In 1957 Vitra signed a licence agreement with Herman Miller and began producing the Eameses’ designs for Europe and the Middle East. Charles and Ray Eames have had a profound and lasting influence on Vitra. It was the encounter with their work that spurred the company’s beginnings as a furniture manufacturer. Yet it is not just the products of Charles and Ray Eames that have left a mark on Vitra. Even today, their design philosophy continues to significantly shape the company’s values, orientation and goals.
This seminal influence is most clearly reflected in the question that is always asked at Vitra when making important design decisions: What would Charles and Ray say? Over the course of their shared lifetime, the couple gave their answers during trips to Europe and return visits to California. Since the death of Charles (1978) and Ray (1988), Vitra has remained in close contact with the Eames family, which now runs the Eames Office, regarding all matters concerning the preservation, further development and production of Eames designs. Vitra is the sole authorised manufacturer of Eames products for Europe and the Middle East. When you own an Eames product made by Vitra, you know it is an original.