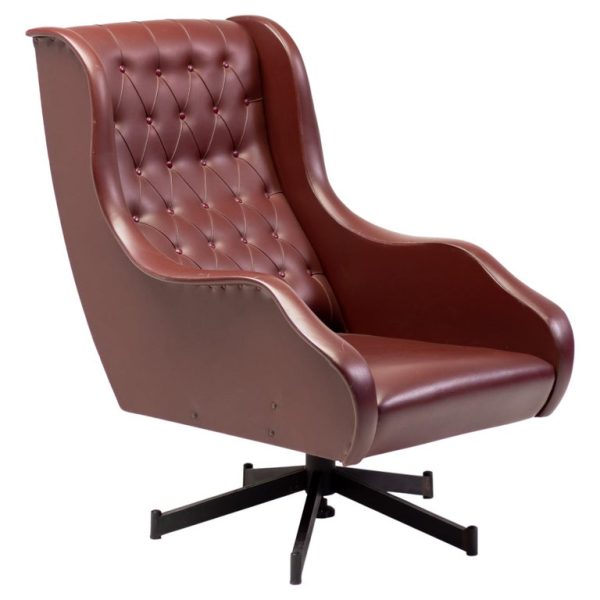 Very comfortable 1960s Loungechair with adjustable tilt mechanism. Attributed to Osvaldo Borsani. The oxblood red Naugahyde is still in wonderful original condition. A very comfortable lounge chair.
Osvaldo Borsani (Varedo 1911- Milano 1985) began work at an early age in the family business of making furniture. In 1933 he participated in the fifth Triennale of Milan with the design for the “ Minimal House”, which was awarded the silver medal. In the post-war period, after graduation from Polytechnic, he formed friendships with numerous artists like Lucio Fontana, Agenore Fabbri, Aligi Sassu, Roberto Crippa, Fausto Melotti, and Arnaldo Pomodoro, together with whom he realized important works of art in furnishing and interior architecture. In 1953, along with his brother Fulgenzio, he founded Tecno, the great project for which he worked his whole life in order to develop standard production with reference to that of design. His first industrial designs were the P40 adjustable armchair (1953) and the D70 reversible seat sofa. In 1968 it was the office system Graphis (together with Eugenio Gerli and coming into vogue around the world in a million copies) thanks to which Tecno became a world-leading manufacturer in design for the office.