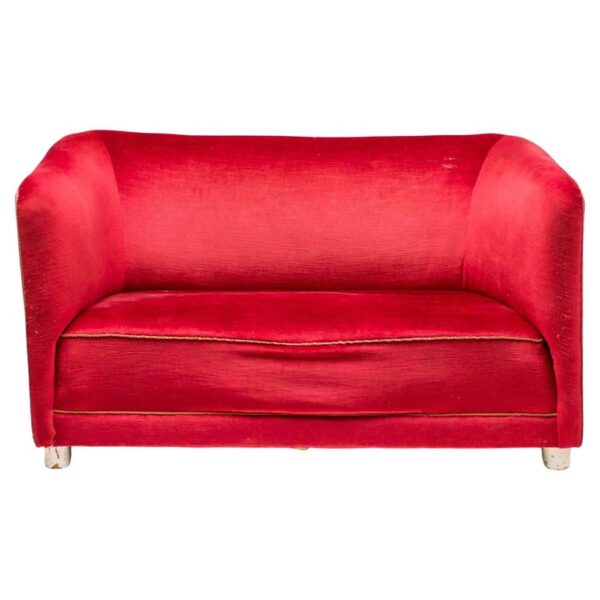 Sofa designed by Ole Wanscher for Fritz Hansen in the original red velvet. The velvet has two small repairable pinholes in the seat, but is otherwise in great vintage condition. The wooden base still has its original white lacquer, that has wear from many years of use.
Ole Wanscher (1903-1985) was integral to the core aesthetic and functionality of modern Danish design. He studied under Kaare Klint at the Royal Danish Academy of Fine Arts and later worked at Klint’s design studio before becoming an independent furniture designer. He helped shape Danish furniture design as a designer and as an educator when he took over Klint’s professorship at the Academy.
Wanscher’s classic and contemporary designs made him popular. In 1958, the Danish newspaper Politiken wrote: “Owning a Wanscher chair is an adventure every day, and will be so even several hundred years from now, for this is how long it lasts”. Today, his modern classics are still revered for their detail and his deep respect for materials.
While traveling through Egypt and Europe, Wanscher studied furniture design, finding inspiration in varied visual expressions that he incorporated into his own unique design aesthetic. He viewed furniture design as a branch of architecture and emphasized slim dimensions and resilient forms – a quest exemplified in many of his works.