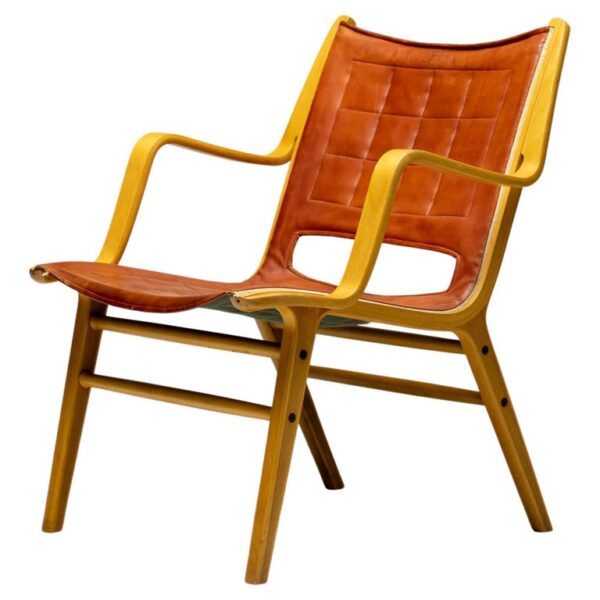 Armchair designed by Peter Hvidt and Orla Mølgaard–Nielsen and produced in 1963 by Fritz Hansen, Denmark. The chair is press shaped in laminated beechwood, the seat is upholstered with all original cognac leather. The legs feature a teak core. Marked with FH label. An example of this chair design can be found at the Museum of Design in Copenhagen.
Peter Hvidt was born in Copenhagen in 1916, the son of L. N. Hvidt, president of the Danish Maritime and Commercial Court.[1] After completing his training at the Design School in Copenhagen, he worked at various design firms before setting up his own studio in 1942. In 1944 he opened the Hvidt & Mølgaard studio which he ran with Orla Mølgaard-Nielsen until 1975. They created a number of pioneering sets of furniture including Portex (1945) and Ax (1950), using a laminated technique for production by Fritz Hansen. The chairs were specially designed for export, economizing on space and packaging requirements for transportation.[2]
Hvidt & Mølgaard increasingly took on architectural assignments (from 1970 together with Hans Kristensen). Projects covered office buildings and factories, including the De Danske Sukkerfabrikker building in Copenhagen (1958), as well as collective housing projects in Søllerød, Hillerød and Birkerød (1962–1970), all completed in a light, clear and simple style.[3] The firm also acted as consultants on the new Little Belt Bridge (1970) (1970) and the Vejle Fjord Bridge (1980), playing an important part in the success of their designs.[2][4]