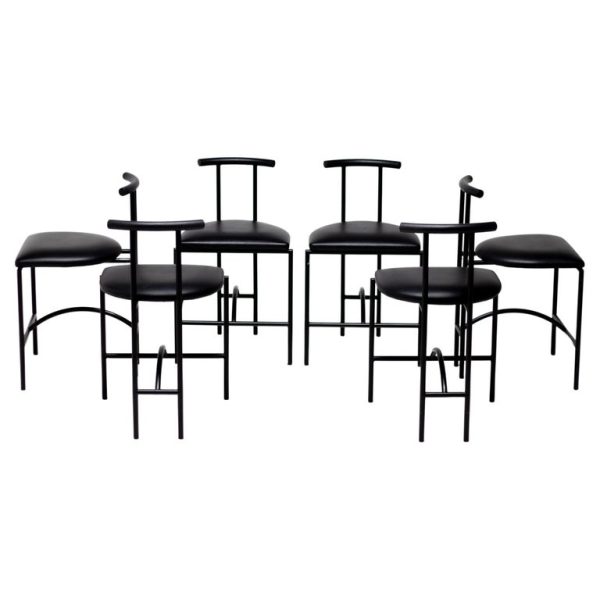 Set of 6 Tokyo chairs by Rodney Kinsman for Bieffeplast, 1985 Black stools mod. Tokyo with chromed steel structure, leather seat and rubber backrest. Produced by Bieffeplast and designed by Rodney Kinsman in the 1985. Marked with Bieffeplast label at the bottom. Priced as a set. Rodney Kinsman studied furniture design at the Central School of Art in London. Together with Jurek Olejnik and Bryan Morrison, he founded OMK Design in 1966 to make the furniture they designed. In 1971 Rodney Kinsman designed the enormously successful “Omstak” chair with a tubular steel frame, seat and back of molded sheet steel coated with epoxy resin.Regarded as the epitome of 1970s high-tech design, the “Omstak” chair is still made by the Italian firm of Bieffeplast. Another design Rodney Kinsman did for Bieffeplast is the 1981 “Graffiti” shelving system, which is simply leaned against the wall; rubber beneath it prevents it from slipping. In the 1980s, Rodney Kinsman produced pieces that were at the opposite extreme to the colorful and exuberantly decorative anti-design produced by Memphis and others. The Rodney Kinsman 1980s designs were informed by a rationalist aesthetic. They include the “Vienna” chair Rodney Kinsman designed in 1984 as well as the 1985 “Tokyo” line. In 1983 Rodney Kinsman became a Fellow of the Society of Industrial Artists and Designers and, in 1988, an Honorary Fellow des Royal College of Art.