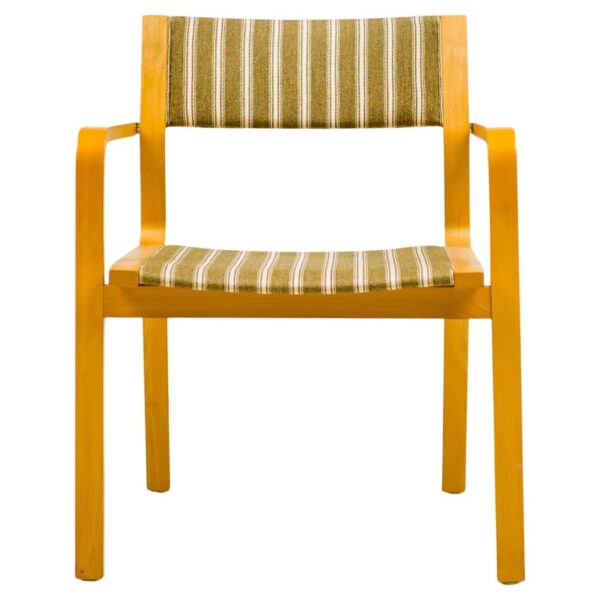 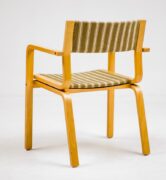 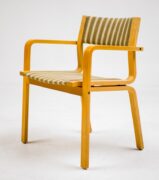 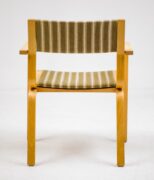 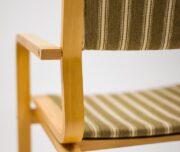 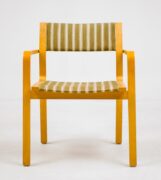 Rare St. Catherine College chairs with the original upholstery. Each of the student rooms at St. Catherine College in Oxford, Great Britain was furnished with an easy chair with frames of laminated wood. These chairs where only made for the St. Catherine College at Oxford, so they are very rare! Marked with label Fritz Hansen, 1978. Four available, priced individually.
Arne Jacobsen was born on 11 February 1902 in Copenhagen. Still a student, in 1925 Jacobsen participated in the Paris Art Deco fair, Exposition Internationale des Arts Décoratifs et Industriels Modernes, where he won a silver medal for a chair design. On that trip, he was struck by the pioneering aesthetic of Le Corbusier’s L’Esprit Nouveau pavilion. Before leaving the Academy, Jacobsen also travelled to Germany, where he became acquainted with the rationalist architecture of Mies van der Rohe and Walter Gropius. Their work influenced his early designs including his graduation project, an art gallery, which won him a gold medal. After completing architecture school, he first worked at city architect Poul Holsøe’s architectural practice.
In 1929, in collaboration with Flemming Lassen, he won a Danish Architect’s Association competition for designing the “House of the Future” which was built full scale at the subsequent exhibition in Copenhagen’s Forum. It was a spiral-shaped, flat-roofed house in glass and concrete, incorporating a private garage, a boathouse and a helicopter pad. Other striking features were windows that rolled down like car windows, a conveyor tube for the mail and a kitchen stocked with ready-made meals. A Dodge Cabriolet Coupé was parked in the garage, there was a Chris Craft in the boathouse and an Autogyro on the roof. Jacobsen immediately became recognized as an ultra-modern architect.