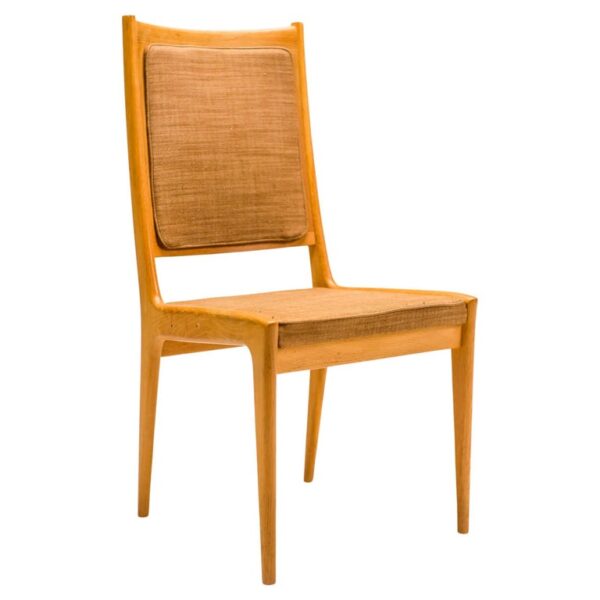 Beautiful set of 6 dining chairs designed by Karl Erik Ekselius for JOC. Elegantly carved teak frames with the original light brown fabric. The original foam was completely deteriorated, and was carefully replaced with new foam by our upholsterer. The fabric has very minimal soiling at some of the seats, the overall look is beautiful. Re-upholstery is also available upon request.
Swedish furniture designer Karl-Erik Ekselius was born in 1914 in Ålesund, Sweden. He studied carpentry in Germany and at Carl Malmsten’s school for Furniture Studies in Stockholm sometime during the 1930s. Subsequently, he worked for J. O. Carlsson (known later as JOC Möbel AB) in Vetlanda, eventually taking ownership of the company in 1961.
During the famous H55 Exhibition in 1955 in Helsingborg, Sweden, Ekselius gained international recognition with his designs. Like many of his Swedish contemporaries during the 1950s and ‘60s, Ekselius originated Scandinavian modern furniture , including dining chairs , dining tables , and coffee tables , in richly grained woods like rosewood and teak. He also developed armchairs and office chairs in chromed metal and supple leather. For J. O. Carlsson, he designed the Mondo Chair (1960s) and the F60 Easy Chair (1960s). He also designed furniture for the Dag Hammarskjöld Library in New York. Ekselius passed away in 1998.