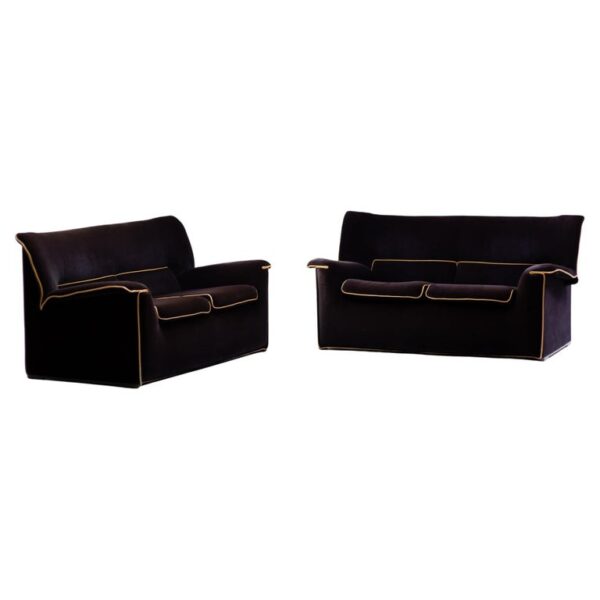 Pair of Lauriana 2-seater sofas designed in 1978 by Afra & Tobia Scarpa for B&B Italia. Dark chocolate brown removable velvet upholstery with camel leather piping. Mounted on a steel frame with plastic feet. Two loose seating cushions. Good condition with minimal wear. Priced as a pair but available individually. Marked with label.
Chic, distinctive, and cool, the work of husband-and-wife-team Tobia and Afra Scarpa has found a new generation of sophisticated admirers in the 21st century. Their designs exhibit a decidedly modernist aesthetic, prioritizing pared-back elegance and comfort. At the same time, the Scarpas are admired for the ease with which their designs complement both classical and cutting-edge interiors.
Born in Venice in 1935, Tobia Scarpa is the son of famed architect-designer Carlo Scarpa. Alongside his wife Afra (née Bianchin, born in Montebelluna in 1937), he began working with Venini glassworks in Murano in the 1950s. In 1960, the couple established their design office in Montebelluna. Together, they created works for companies such as Flos, Cassina, B&B Italia, and Knoll. They embraced a variety of materials and expanding technologies across a wide range of designs, from glass, furniture, and lighting to interiors and architecture.
During the 1960s, the pair began an ongoing relationship with the Benetton clothing company, which led to a number of different projects, including the first Benetton textile factory in Treviso (1964), as well as interiors for the company’s Paris and Freiburg offices (1980) and New York office (1986).
In 1969, both Tobia and Afra Scarpa graduated from the Venice Institute of Architecture, with the former winning a Compasso d’Oro prize the following year for the Soriana Armchair for Cassina. Other notable projects include the iconic 1960 Bastiano collection for Gavina, consisting of a sofa, lounge chair, and tables—later reissued by Knoll; the 1966 Coronado Armchair series for B&B Italia, a collection of polyurethane-padded furniture created using the then-new, cold-molded foaming process; and the 1973 Papillion Lamp for Flos, one of the first lighting designs to use halogen technology.
The pair’s work has been included in numerous museum and gallery exhibitions and honored with many awards, including the 1992 iF Design Award.