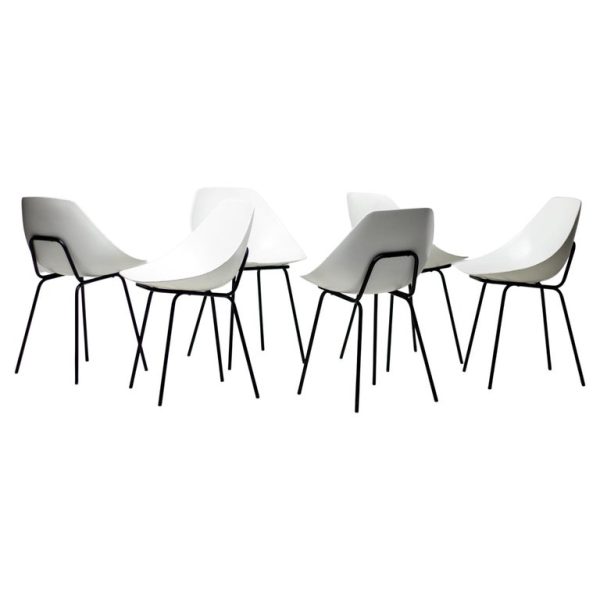 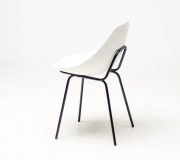 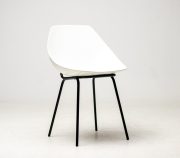 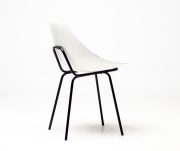 White fiberglass shell chairs designed in the 1950s by Pierre Guariche. For a very short period the Coquillage or Scallop chair was reissued by Maisons du Monde, France. Each chair is marked with the signature of the designer. Priced as a set of 6.
Pierre Guariche was a French designer, interior decorator and architect. He is perhaps best known for the residential lights that he designed for Pierre Disderot in the 1950s, but he was also an innovative furniture designer and architect. He studied at the École nationale supérieure des arts décoratifs, where he was taught by René Gabriel. He became a member of the Union des artistes modernes (UAM). He joined the studio of another of his teachers, Marcel Gascoin. He began to exhibit his own work in the Salon des Arts Ménagers and the Salon des Artistes Décorateurs. In the period after World War II there was increased interest in using new methods and materials for mass production of furniture. Manufacturers of materials such as formica, plywood, aluminum, and steel sponsored the salons of the Société des artistes décorateurs. Designers who exhibited their experimental work at the salons in this period included Guariche, René-Jean Caillette, Joseph-André Motte, Jean Prouvé, Charlotte Perriand, Antoine Philippon and Jacqueline Lecoq.