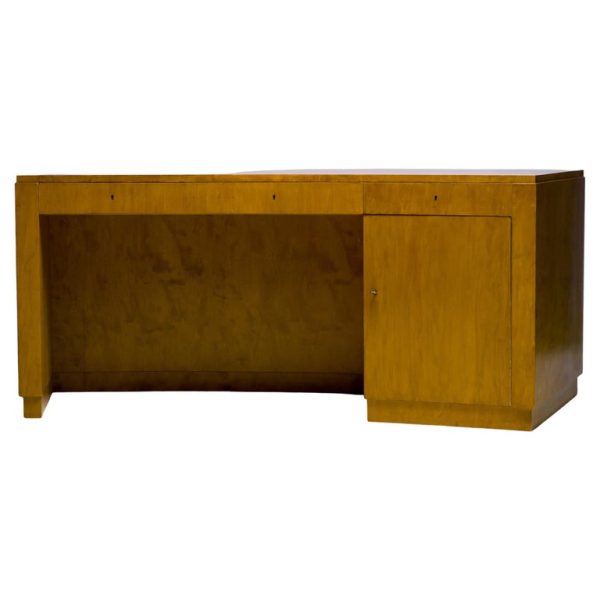 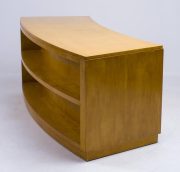 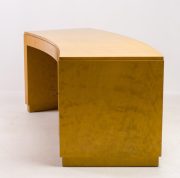 This beautifully streamlined desk is designed by Axel Einar Hjorth for NK in the 1930s. Clad in a pale gold birch veneer (Birka is Swedish for birch) with three locking drawers and a locking door with four concealed drawers. Two shelves are built into the frontside. The entire desk constructed in a graceful arc. Brass lined keyholes, the original keys are present.
Axel Einar Hjorth (Swedish, 1888 – 1959) was an important Swedish furniture designer, and the chief architect at Nordiska Kompaniet, a high-end department store in Stockholm, from 1927-1938. From this prestigious position, Hjorth became renowned for designing many of Stockholm’s public interiors, such as the city library and Centre Hall, as well as private interiors for an impressive list of clients, which included the Shah of Persia. His designs received acclaim in exhibitions both at home and abroad, including the World Exhibition in Barcelona in 1929, the Stockholm Exhibition in 1930, and the World Expo in New York in 1939.
Hjorth began his education in the arts in 1908 at the prestigious Högre Konstindustriella Skolan (later called the Konstfack) and remained until 1910 without completing the program, unable to continue his studies for financial reasons. However, in learning through experience, Hjorth became well established as a designer prior to his career at Nordiska Kompaniet, not to mention an important advocate of introducing Swedish design to international audiences. Early in his career, Hjorth designed for several different manufacturers, including H. Joop & Co., Myrstedt & Stern, and Jonsson’s throughout the 1920s, as well as Bodafors, with whom he collaborated into the 1940s. He participated in the Jubilee Exhibition in Gothenburg in 1923, which included his designs for Bodafors, and in 1927 exhibited alongside Carl Malmsten at the Swedish Decorative Arts exhibition at the Metropolitan Museum of Art in New York.
By the 1930s, Hjorth had come to work in his definitive style, which consisted of a balance of modern ideals and provincial influences. His sources of inspiration have been documented to be Nordiska Kompaniet’s extensive collections of books and magazines dedicated to modern French sculpture, and Hjorth happened to have named a table after Constantin Brancusi. He executed many of his designs in simple materials, such as solid pine or oak with iron details, often which were hand-forged. Hjorth’s Sportstugemöbler line, which he designed for Nordiska Kompaniet between 1929-1932, is a fantastic representation of how Hjorth would make use of simple yet robust geometries, and execute his designs in a way that upheld traditional Swedish craftsmanship. The line, however, was so progressive in its style, that it could only be marketed to the forward-looking upper class. It was therefore manufactured in very limited numbers and produced until the early 1950s.
In1938, Hjorth left Nordiska Kompaniet to open his own showroom in Stockholm, and also an architectural office. His efforts to work independently were thwarted when he suffered a devastating loss at the 1939 World Exhibition in New York; his designs were left outdoors and exposed to heavy rains. Additionally, wartime restrictions on the importation of certain woods limited his production. He was forced to close his operations at the end of the 1940s and sought a position at Aski, a company, which produced simple office furniture and interiors.
In 1959, Hjorth passed away from a sudden illness. He left no known published treatises or archives. Until recently, the lack of documentation, in addition to Hjorth’s willingness to create outside of the tenets of the popular functionalism that was determined by The Swedish Society of Crafts and Design, has accounted for his under-recognition in comparison to contemporaries like Carl Malmsten. Recent efforts by the historian Thomas Eckstrom have uncovered a trove of information on the designer and reintroduced his magnificent designs, which are now highly collectible for their quality of craftsmanship and exceptional beauty and simplicity.