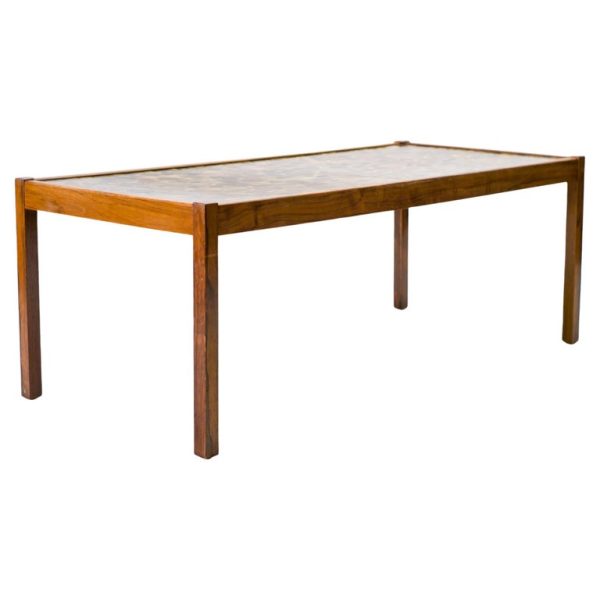 Teak coffee table designed by Ib Kofod-Larsen for Seffle Möbelfabrik. Remarkable coffee table with a polyester top with cast in natural pebbles.
Ib Kofod-Larsen was born in 1921 in Denmark. Kofod-Larsen was trained as a cabinetmaker with the highest honours in 1944, and later completed his education at the Royal Danish Academy of Fine Arts in 1948. The same year he opened his own studio in the Danish capital, embarking on a long and successful career.
Throughout his career, Ib Kofod-Larsen worked with seating positions, construction, upholstery and bentwood shells. Due to his experimental approach to furniture, Dansk Glasfiber Industri hired him in 1953 to cooperate in developing heat-hardened polyester as part of the design of new furniture types. He focused mainly on furniture, but also designed radio and television cabinets, silver, glass, fabrics, textiles, curtains, wallpaper, and industrial design.
Kofod-Larsen viewed Scandinavian design not as a regional phenomenon but as part of international modernism. He designed for several leading mid-century manufacturers, both in Denmark and abroad. His great international success placed him as the best-selling Danish architect in the US in the 1950s, working with furniture manufacturers in Germany, Sweden, Japan, the US, and the UK, and exhibiting throughout Europe and the US. Kofod-Larsen frequently worked with resplendent woods such as teak and rosewood, also including rich leathers.
His first recognition as a designer came when he won the Holmegaard Glass Competition and received the Danish Cabinetmakers Guild’s annual award. These awards attracted the attention of the Danish furniture manufacturer Faarup Møbelfabrik. During his time at Faarup, he created some of his most beautiful works, like the rosewood ‘Model 66’ sideboard, and established himself as a furniture designer. Ib Kofod-Larsen belongs to the same period of Danish furniture design as several of the country’s most notable designers. His works are clearly inspired by Scandinavian Modernism, and his pieces follow the basic outsets of Danish mid-century design, creating versatile, practical pieces with a graceful, minimalist aesthetic. Kofod-Larsen used natural grains and patterns in raw materials making these elements the focus of his designs. His works have the constant use of elegant woods, such as teak and rosewood, together with leather which results in a clean layout with sculptural lines.