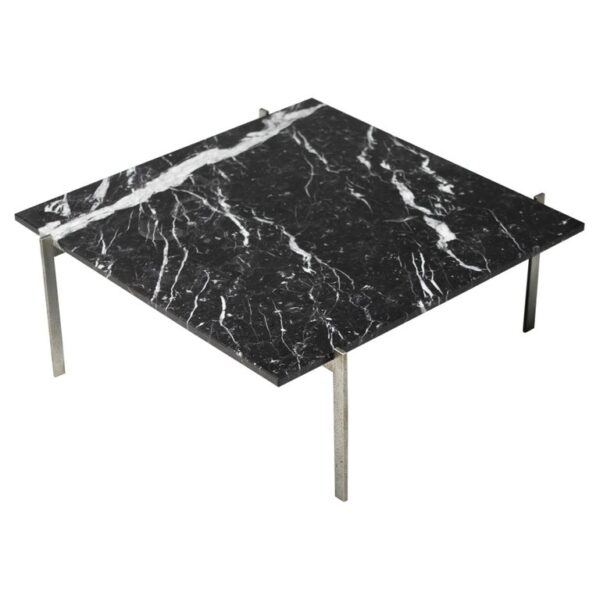 Poul Kjærholm for E. Kold Christensen, black marble and metal, Denmark, design 1955.
This table by Kjærholm is the epitome of minimalistic yet monumental design. The ‘swastika’ shaped steel frame holds a beautiful worn black marble top. With this table he was able to get the architectural core in his design. The table, by means of the steel supports, shows the fundamental principles of architecture. Kjærholm thought the rectangular table to be a piece of furniture in which the emphasis on length was important. It is interesting to know that Kjærholm was a designer who went into great work to give each table the significant form that belonged to its function. Thus this square sofa table with its for equal sides provides exactly enough room between those seated around it and takes their eye off the floor and shoes.
Poul Kjærholm (1929-1980) was a Danish architect and furniture designer whose approach to architecture was that of a craftsman. He developed two principles in his work: the sculptural and the architectural. He designed by intuition, his pieces resemble references to Egyptian and Greek work but also to the pioneers of the 20th century such as Bauhaus, Rietveld or Mies van der Rohe. Kjærholm designs are modest in means but rich in expression.
Literature: – Harlang, Christoffer, Keld Helmer-Petersen and Krestine Kjærholm. Poul Kjærholm. Copenhagen: Arkitektens Forlag, 1999, p. 22, 86.