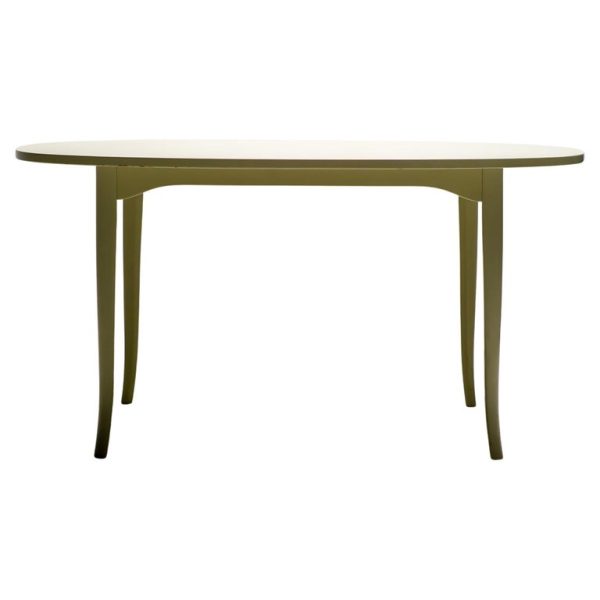 Elegant white lacquered mahogany side table, designed by Carl Malmsten for Möbel Komponerad AV. Marked with bronze medallion.
Carl Malmsten (December 7, 1888 – August 13, 1972) was a Swedish furniture designer, architect, and educator who was known for his devotion to traditional Swedish craftmanship (slöjd) and his opposition to functionalism. He “considered the rationalization of the home according to functionalist principles a debasement of its traditional role as an intimate place for gathering and repose”.
Sometime between 1904 and 1973, he designed for the world-famous NK Department Store in Stockholm. During in the 1920s, Malmsten was commissioned to create furnishings for a number of highly important clients, including the prince of Sweden, Gustaf VI Adolf in the Ulriksdal Palace (1923), Stockholm’s Concert Hall (1928), The Swedish Match Company (1928), Waldorf-Astoria in New York (1930), and the House of the League of Nations in Geneva (1934). Most of his furniture was named after the towns or clients who commissioned them.
In 1930, Malmsten founded the Carl Malmsten Furniture Studies in Stockholm, which later became its own department at the Linköpings University in 2000, offering educational courses in furniture design, cabinetmaking, furniture conservation, and furniture upholstery. In 1957, Malmsten established his second school, Capellagården, on the island of Öland in Vickleby. Today, the school offers courses in textile craft and design, cabinet making, furniture design, interior carpentry, ceramics, and organic horticulture.
Over the course of his illustrious career, Malmsten was awarded with several prestigious awards including the Prince Eugen Medal for design in 1945. Notably, he was a member of Svenska Slojdforeningen (Swedish Society of Industrial Design). He advocated the traditional role of the home as a place for gathering and leisure, believing that the rationalization of the home according to functionalist principles was a perversion of these import roles.
Malmsten passed away in 1972 on the island of Öland in Sweden. Malmsten continued to work, designing and teaching until his death. It is believed that the designer left behind more than 20,000 sketches and detailed drawings of his designs, which today are considered an exclusive cultural heritage and are part of the Siv and Carl Malmsten Memorial Foundation. Malmsten’s contribution to Swedish handicrafts and education is still remembered today, as he wished for future generations to have the opportunity to nurture their innate creative desires. His dedication and passion to Swedish design has afforded him, alongside Bruno Mathsson and Yngve Ekström, the title of one of Sweden’s best known furniture designers.